Four years ago, pine trees and farmland covered most of a 270-acre area just west of Apex, North Carolina.  The land was slated to be developed into a mixed residential community with single-family homes, townhomes, and apartments to meet the burgeoning demand for housing in the Raleigh-Durham Area.  The residents moving to the development would need and want access to public services comparable to the communities around them. The answer, as is often the case in high-growth areas, was annexation into the town of Apex.

Annexations are not unusual in North Carolina. During the last decade slightly more than half the municipalities in the state have expanded their geographic boundaries via annexation. Most of the population change occurring in municipalities we’ve discussed in prior blog posts happens within the boundaries of cities, towns, and villages as those boundaries were defined on January 1, 2010. However, the influence of annexations on population change should not be overlooked.

Within specific guidelines, municipalities may increase their geographic boundaries by annexing nearby land (adjacent or within a specific distance). In most cases, land is annexed that may have no existing residential structures and associated population at the time of the annexation. These areas may be annexed in anticipation for and as a long-term plan for residential development. In other cases, land that includes existing residential properties may be annexed into a municipality.

Municipalities may annex land with no plan to ever include residential development within the newly annexed areas. These areas may already be or may become land set aside for commercial use (such as retail stores, warehouses, or manufacturing facilities), public utilities (such as wastewater treatment sites or water supply facilities), or greenspace (such as parks or greenway trails).

In addition to local government actions, the General Assembly can pass legislation to annex properties into a municipality, and the General Assembly is the only governmental body that can remove property from a municipality. The North Carolina Office of State Budget and Management collects information regarding municipal annexations from municipalities through the North Carolina Demographic Information Survey which are then included in our latest population estimates (See note).

Annexations Across NC: The Data 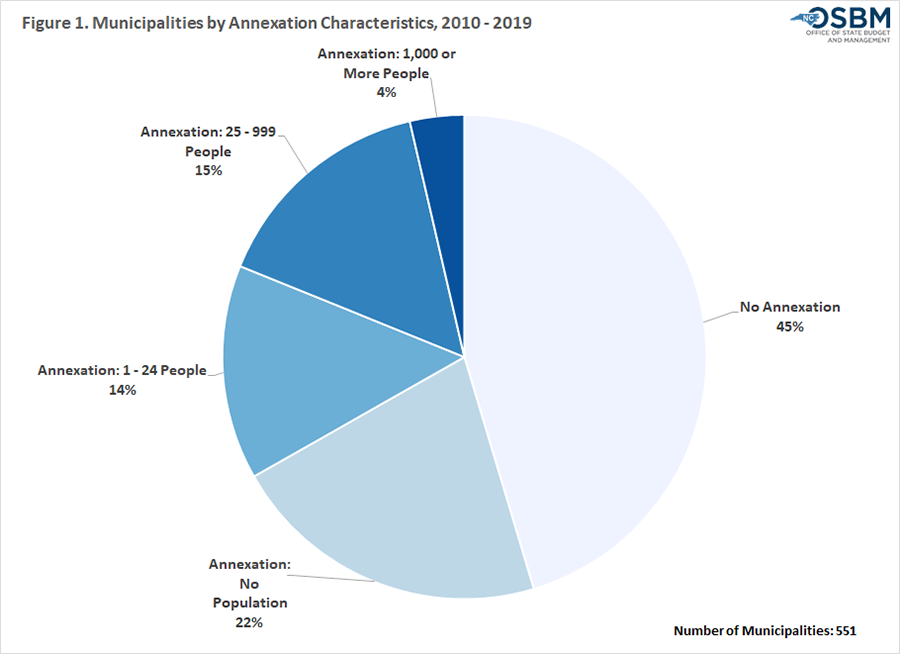 Which Municipalities Saw the Greatest Impact on Growth?

Apex, a suburban community near Raleigh, added more population through annexation than any other municipality – adding 16,571 people between 2010 and 2019. Approximately 70 percent of the growth that occurred in Apex during this decade was on land that was not part of the city of Apex on January 1, 2010.

Neighboring Cary had the second largest gain in population through annexations – adding 8,756 people in annexed areas (27 percent of its total population growth since 2010).

Among municipalities that added at least 1,000 people through annexation, annexations accounted for at least 40 percent of all population growth for Apex (69.8 percent), Harrisburg (44.3 percent), Pinehurst (42.2 percent), Kernersville (44.8 percent), and Hope Mills (62.0 percent). 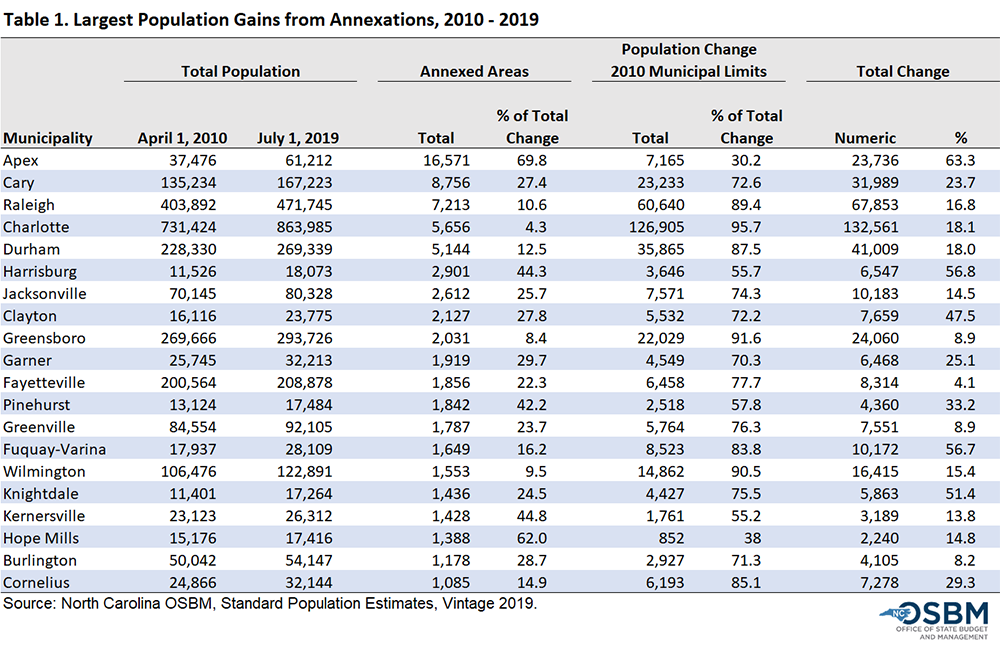 Which Municipalities Saw the Greatest Impact on Land Area? 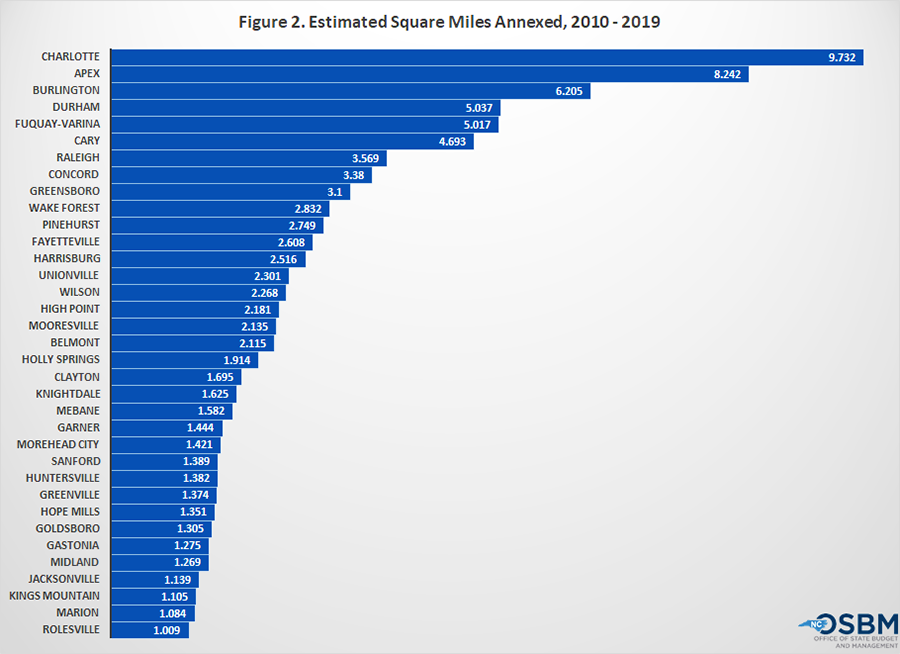 Fourteen municipalities increased in size by at least a quarter over their size in 2010. Apex increased by almost 54 percent, followed by Bermuda Run (46 percent) and Middlesex (45 percent).  Bermuda Run is located outside of Winston-Salem in Davie County while Middlesex is in Nash County (Figure 3). 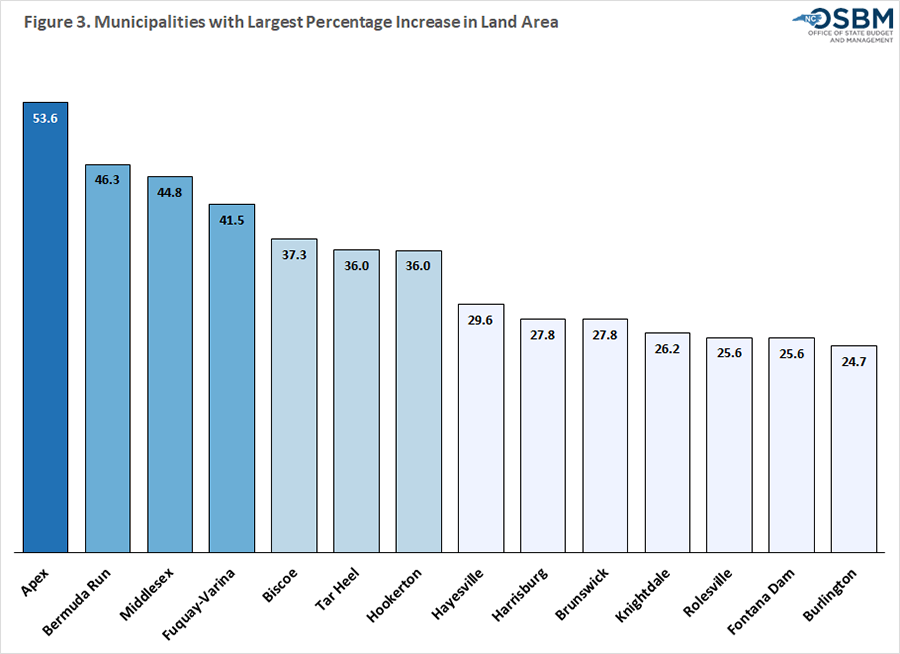