Miguel came to North Carolina from Colombia when he was a little boy, not yet old enough for school. While many of his family members still live in Colombia, North Carolina is the only home he can recall. As a teenager, he became a naturalized citizen, along with his parents.

Julia came to North Carolina from Germany to attend graduate school. While completing an internship she fell in love with a fellow engineer. They are now expecting their first child and Julia has decided to begin the process to become a U.S. citizen.

According to the Census Bureau’s most recent 5-Year American Community Survey data, there are 832,602 people in North Carolina who, like Miguel and Julia, were born outside the U.S. but now call North Carolina home. Foreign-born residents make up 8% of the state’s population.

The stories and origins of this portion of the state’s population are more varied than you might expect. The data in the Census Bureau’s American Community Survey (ACS) can provide a glimpse into the into the richness of our state’s cultural diversity among the foreign-born population.

Many Foreign-Born Residents are Naturalized Citizens

Two out of every five foreign-born people living in North Carolina are naturalized citizens. This means, like Miguel, they went through the process of becoming a U.S. citizens.

As you might expect, the longer a person has been in the country, the more likely they are to be naturalized. While just over 12% of foreign-born people who arrived in 2010 or later have been naturalized, more than three-quarters of those who arrived before 1990 are.

Foreign-Born Residents Come from Across the Globe 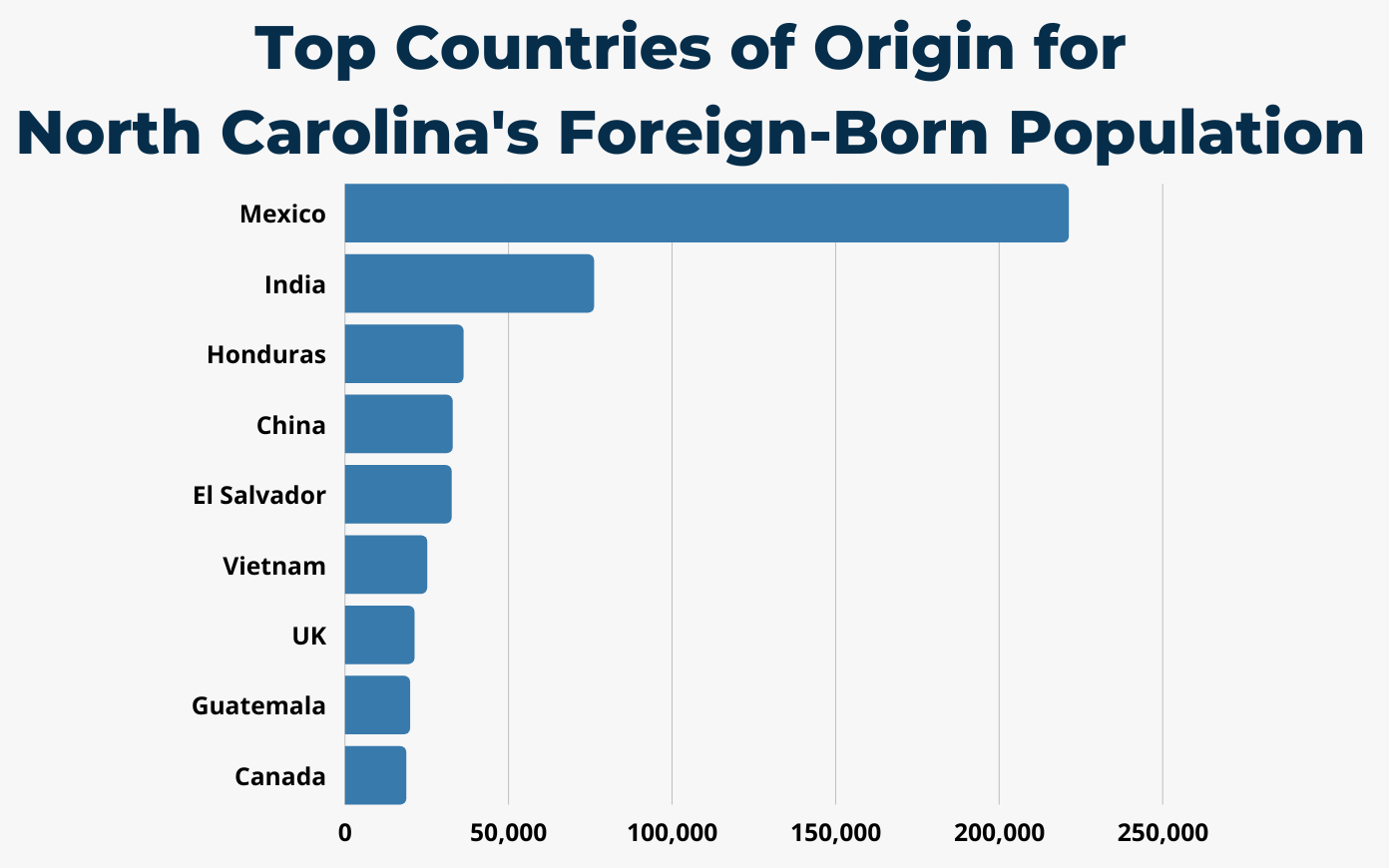 Changing Trends in Country of Origin

While the largest number of foreign-born residents are from Latin America, the region represents a decreasing share of the foreign-born population. Meanwhile, the number of people originally from nations in Africa and Asia has increased by 44% and 24% respectively.

The nations of origin with the largest percentage increases in North Carolina’s foreign-born population may not be obvious.

How Does North Carolina Compare to National Trends

According to the U.S. Census Bureau data, more than half of foreign-born people in the U.S. are naturalized, while North Carolina’s rate is 40%.  For both North Carolina and the nation, that percentage has increased compared to the prior 5-year ACS data.

Use LINC to Learn More about North Carolina's Foreign-Born Population

Explore the data on North Carolina’s foreign-born population on LINC (Log Into North Carolina). This data platform provides easy access to data about our state, including visualizations like the one below. You can even use LINC to look at countries of origin by county.