Fast forward to 2021. We now celebrate National Native American Heritage month every November and this year the 2020 Census results were released reporting 9.7 million people identified as Native American and Alaska Native, alone or in combination with another race. According to the Census Bureau, just over 300,000 of those people live in North Carolina.

As a matter of fact, the 2020 Census found the American Indian and Alaska Native population, alone and in combination with another race, increased a remarkable 160% from 2010 to 2020.

While the increase is worth noting, it’s a challenge to draw many conclusions by comparing the AIAN population from one census count to the next. The Census Bureau adjusts questions and analysis each census to better capture demographic information about our country. For example, the 1990 Census respondents didn’t have the option to identify as multi-racial. The 1.96 million in that Census identified only as AIAN. The ability to identify as AIAN in combination with another race was added in 2000.

In addition, the 2020 Census added Mayan and Aztec as possible suggestions for write-in responses to the American Indian category. This clarified all indigenous tribes are included in the category, not just U.S.-based tribes. Hispanic respondents who also indicated indigenous identity accounted for 1.8 million of the increase in people selecting AIAN.

Yet, 19 NC counties saw at least a 200% increase in AIAN population over that 10-year period. The rise in people identifying as AIAN, alone or in combination with another race, made it the fastest-growing racial group in 37 NC counties. 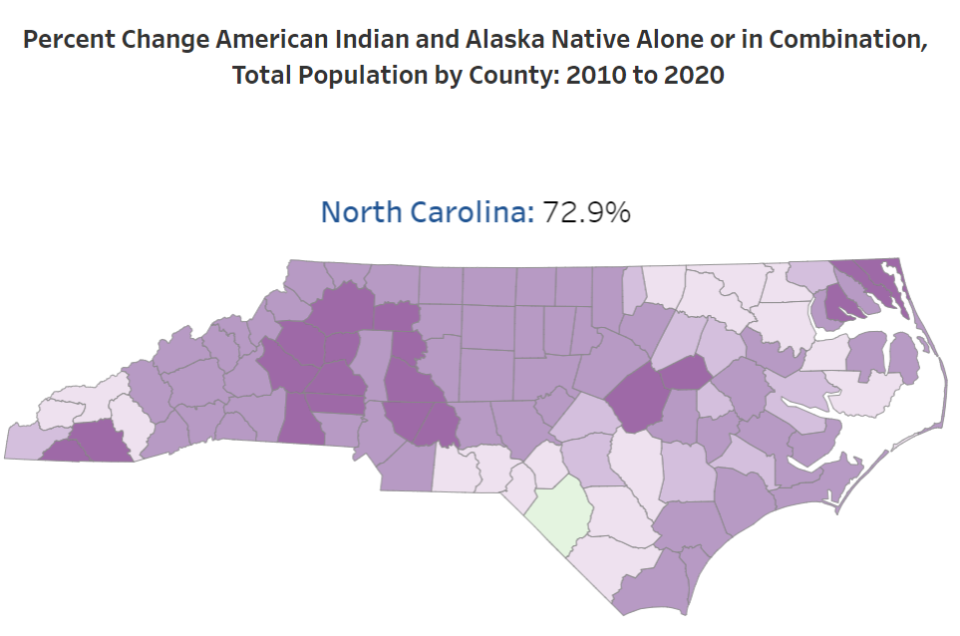 These counties demonstrating the fastest growth in AIAN population are not counties traditionally associated with the eight recognized tribes of North Carolina.

The following counties have the largest percentage of American Indians and Alaskan Natives, alone or in combination with another race:

Statewide, 3% of the population is AIAN alone or in combination. Nationwide that percentage is 1.1%. North Carolina continues to be the state with the largest AIAN population east of the Mississippi River.

The AIAN population in NC may not represent the largest racial or ethnic group in the state. However, it is safe to conclude that more people in the U.S. and in North Carolina identify as AIAN now than in 2010. And our growing AIAN population is not confined to just a handful of counties but an important part of our statewide demographics.