Small towns are alive and well in North Carolina

Despite what you might have heard, small towns are alive and well in North Carolina.

In a prior post, I provided an overview of how the populations of North Carolina municipalities have changed since 2010.  We continue to see tremendous gains in our largest cities and rapidly growing suburban and exurban communities nearby. However, most North Carolina municipalities are small, and many are located far away from major urban centers. 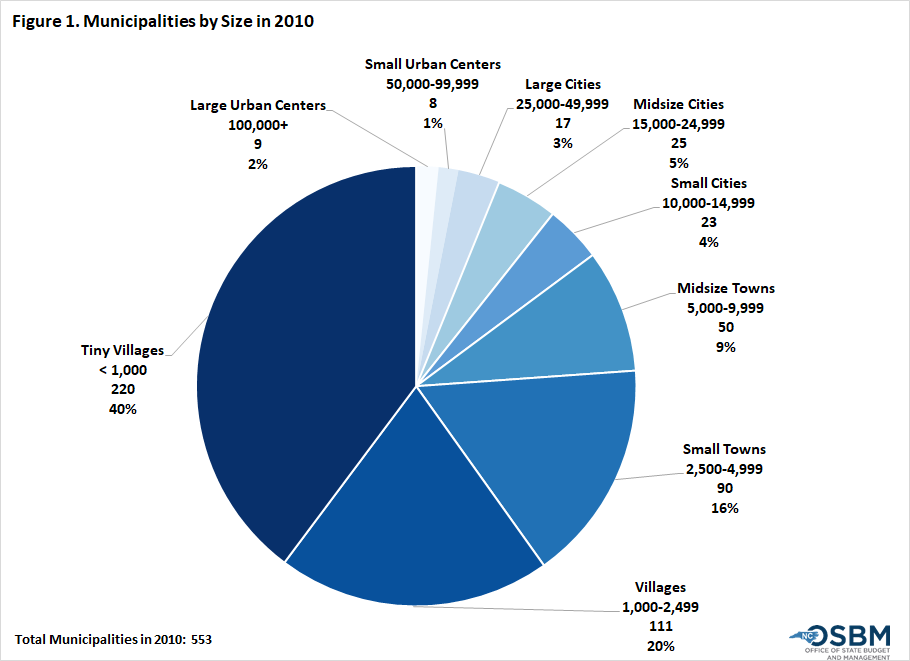 What is a Small Town?

For this post, we focus only on those towns with populations of less than 10,000 at the beginning of the decade. We further delineate these municipalities into:

Despite the attention to the remarkable growth in North Carolina’s major cities, smaller towns in our state experienced growth too, albeit many at a slower rate. Municipalities in North Carolina grew by an average 6.1 percent over the prior decade. Small and midsize towns had average rates above that rate (9.2 and 10.0 percent, respectively), while villages experienced rates just shy of the overall average (5.9 percent) and the average rate of change for tiny villages was just 1.3 percent.

While most municipalities grew from 2010 to 2019, size mattered.  Just 53 percent of tiny villages grew during this period while 81 percent and 74 percent of small and midsize towns, respectively, experienced population growth. Two tiny villages disbanded (Centerville – population 89 in 2010 and Spencer Mountain – population 37 in 2010) so that by the end of the decade there were 551 municipalities ranging in size from 21 (Fontana Dam) and 863,985 (Charlotte).

Waxhaw and Weddington are suburban communities outside of Charlotte.  Elon is also a suburban community (near Burlington) but its growth is also attributed to growth occurring at Elon University. Waynesville is the largest town west of Asheville and has become an attractive place to retire.

Only three of the twenty largest towns lost population: Washington in Beaufort County, Rockingham in Richmond County, and Clinton in Sampson County. 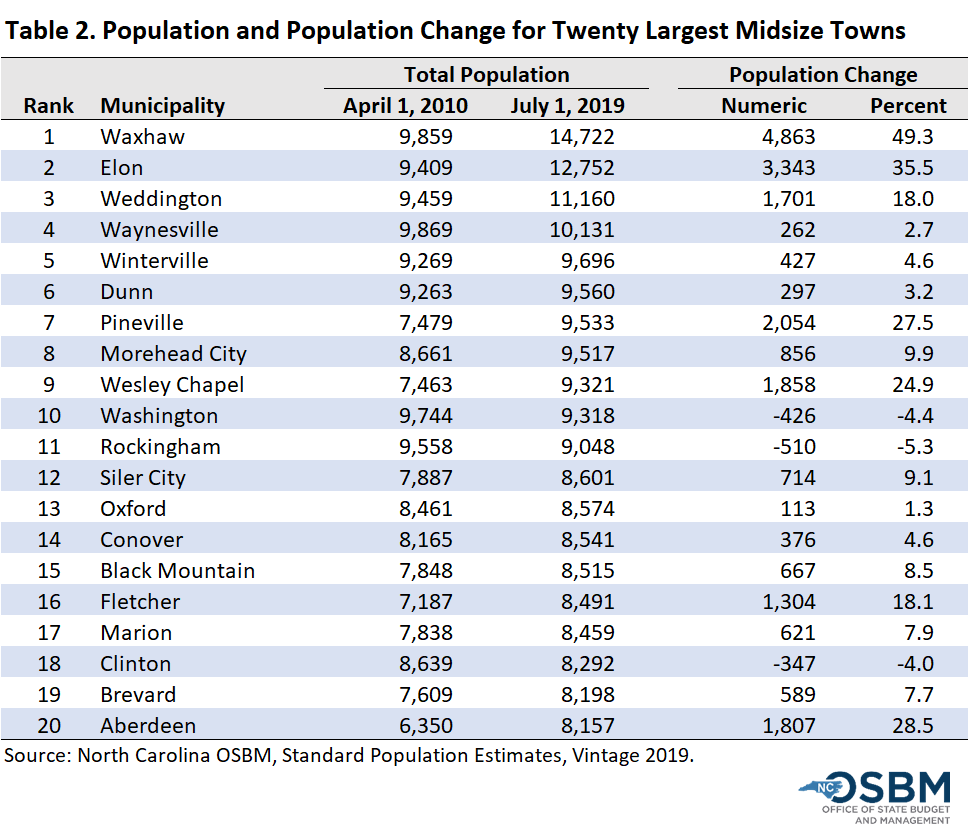 One of North Carolina’s most famous small towns is known by some as Mayberry. Mayberry—a reimagined version of Andy Griffith’s hometown – is actually Mount Airy (which is now considered a small city with 10,286 people as of 2019). Mayberry depicted what people like about small towns: familiarity among friends and neighbors, family-owned businesses, opportunities to be a part of community leadership, and quick access to a good fishing hole (or other outdoor recreation).

In addition, smaller towns are attractive because of lower housing costs and smaller schools.  It is no surprise that small towns near major cities are some of the fastest growing in the state for these same reasons. Of those towns and villages adding the most population since 2010, all are near major cities and most have amenities that have made them attractive for residential development.

Suburban and exurban communities with significant gains include:

Meanwhile, the towns of Boiling Springs Lakes,  St. James, Oak Island, and Shallotte in Brunswick County - just north of Myrtle Beach and south of Wilmington – benefitted from their location near recreational areas and growing cities. Aberdeen benefitted from proximity to the resorts of Pinehurst and growth in residential development attracting soldiers and airmen stationed at nearby Ft. Bragg and Pope Army Airfield.

Eight towns classified as small at the beginning of the decade grew enough that they’ve now been reclassified as midsize towns as of 2019. These towns included: 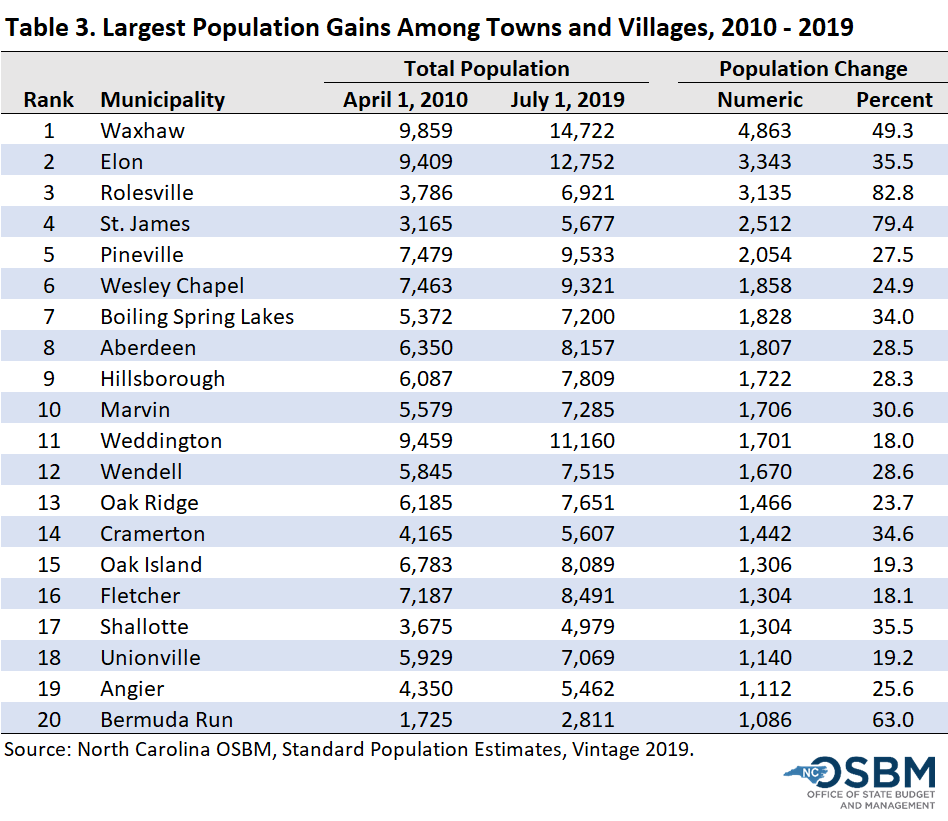 Like Aberdeen, Holly Ridge benefits from its location near recreational areas and its proximity to a major military installation (Camp Lejuene). Among the fastest growing towns and villages are several communities that are located near major cities and in recreational areas of the state, including: Navassa and Carolina Beach near Wilmington, and Montreat near Asheville.

A couple of mountain communities are not near major cities yet still experienced rapid growth – Hayesville and Fontana Dam.  The growth of Fontana Dam was primarily the result of an annexation. See my post on How Annexation is Influencing population among North Carolina municipalities. While annexations account for only a small portion of municipal population growth, it is an important aspect of population growth for some communities. 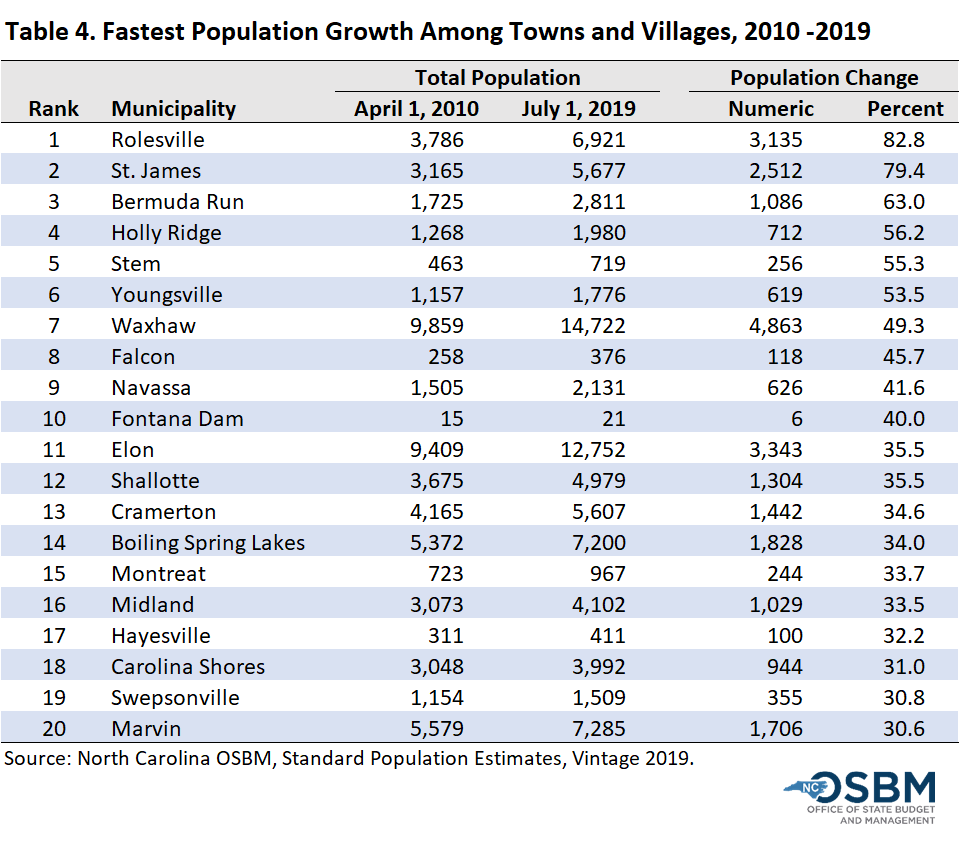 Where Small Towns Are Not Growing

Unfortunately, growth has not been the only story for towns and villages.  As was mentioned before, about 46 percent of tiny villages lost population between 2010 and 2019, and there were losses among the other categories of towns and villages.

Of the top twenty towns and villages losing population between 2010 and 2019, they have one of two things in common:

That was the case for Polkton in Anson County, which lost 1,597 people since 2010 mostly due to loss in prison populations after statewide prison reorganizations. There were also similar, though not as dramatic changes in group quarters populations in Troy, Edenton, Clinton, Hamlet, and Elizabethtown.

This highlights one aspect of the census and subsequent population estimates that many people overlook – the fact that population counts reflect where people normally live - called the resident population.  The resident population includes people living in prisons, college dormitories, military barracks, and similar facilities since people live there for most, if not all, of a given year. Major increases in these populations can help boost a municipality’s population size.

But the corollary is true – closures or other declines in these special populations can give an inaccurate picture of population trends for the municipality’s main population, which is comprised of those living in households. 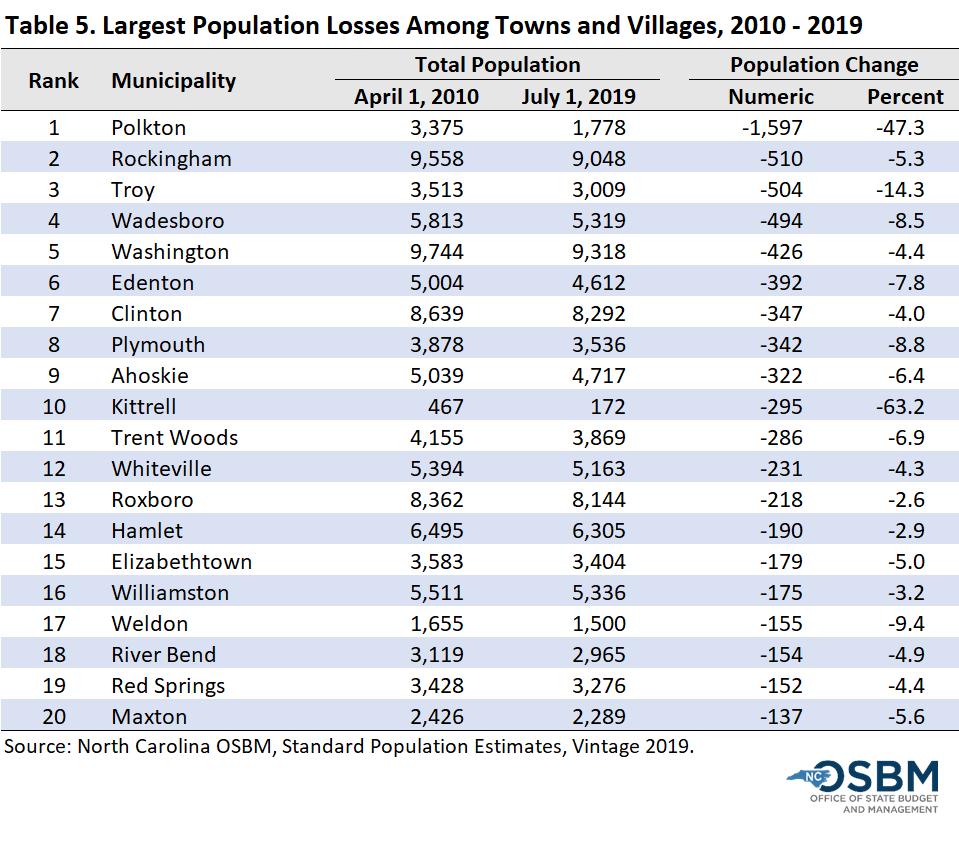 When the Population Count Gets It Wrong

Finally, I want to highlight one particular town in reference to this phenomenon but also how it relates to a vital post-census activity that will occur after the 2020 Census results are reported – the US Census Bureau’s CountQuestion Resolution (CQR) program.

Kittrell shows a population loss from 2010 through 2019 because its official census count was reported as 467 in 2010 and it declined to 172 in 2019.  However, there was an error in the official census count because population living at the Kittrell Job Corp Center – located just outside of the Kittrell municipal limits was counted as if it were living within the city limits.  The CQR is a program designed to allow local governments to challenge the census count due to errors such as this.

After 2010, there were several corrections made to the official census counts through the CQR, including changes to the Tabor City and Troy population counts due to misallocated prison populations. Unfortunately, this error for Kittrell was not corrected and the official count remains.  When using the corrected population by excluding the Kittrell Job Corp Center population – the population in Kittrell has remained virtually unchanged since 2010 (adding an estimated 3 people). Errors in allocation of housing or group quarters facilities is a good example of when the CQR program should be used.

There are procedures local governments must follow and limited ways in which the counts can be challenged. Details about the CQR program and how local governments can challenge their results will be shared by our office and the State Data Center as they become available after the 2020 Census results are reported. Stay tuned!

Leaving aside communities that experience closure of a major residential center, such as a prison, or experience an enumeration issue, such as occurred in Kittrell, some patterns emerge from the data. Small towns are not all dying. In fact, some have grown to transition from small to midsize towns or from midsized towns to small cities.  Many are maintaining steady growth, particularly those that offer easy access to recreation like the mountains or coastal areas.  The fastest growth is occurring in suburbs and exurbs of larger cities.  The towns that are struggling the most are the very smallest (fewer than 1,000) particularly those surrounded by agricultural areas without easy access to a larger metropolitan area or in-demand recreational opportunities.